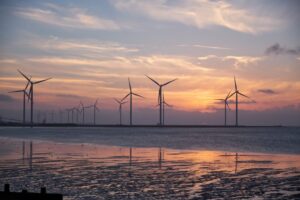 Vattenfall has officially opened its 93.2MW Aberdeen Bay wind farm off the coast of Scotland to help “turbocharge” growth in the industry.

As well as testing new technology, such as the suction bucket jacket foundations and 66kV cabling, the project's impact on marine life will be studied.

Vattenfalll and the EU have invested €3m to study the effect of offshore wind farms on dolphins, salmon, sea trout and sea birds.

Scotland's First Minister Nicola Sturgeon said: “I am proud that as part of this ground-breaking project, the world’s most powerful offshore wind turbines are now up and running in Scotland.

“A single rotation of one of these 8.8MW turbines will generate enough energy to power a home for 24 hours which truly shows the potential of this technology to strengthen Scotland’s renewable energy generating capacity in the future.”

Vattenfall president and chief executive officer Magnus Hall said: “The innovation we have implemented at the EOWDC – and will continue to demonstrate – will turbocharge the growth of a global, low cost offshore wind industry.”

Vattenfall wind business head Gunnar Groebler said: “We have built this pioneering project in partnership and we especially salute the Aberdeen Renewable Energy Group (AREG), the Scottish government and Crown Estate Scotland, for their commitment to deploying what is arguably the world’s most innovative wind farm.