UGP wins the National Business Fives tournament and £500 for charity 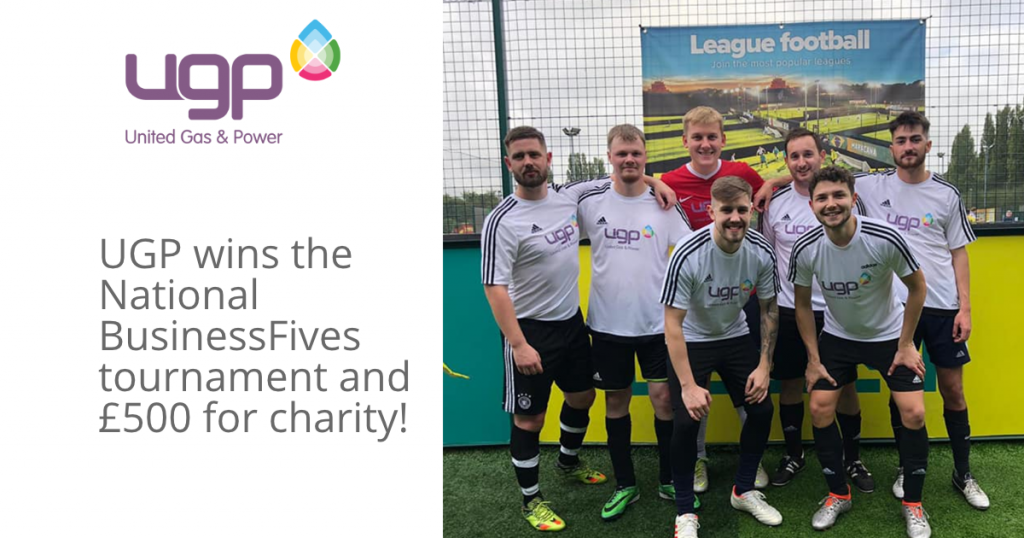 Friday 4th October 2019 will go down in UGP’s history as a victorious day. After entering two teams in the football tournament “Business Fives” in August 2019, consisting of around 30 companies across Yorkshire, one of our teams progressed to the semi-finals and automatically qualified for the National Business Fives Tournament in October.

The National Finals Team had been picked well in advance, however we unfortunately suffered injuries the day before, to three of the seven players that were drafted to play! To lose three players (UGP Co-founders Ross Taylor and Phillip Kane, as well as Direct Sales Manager, Mike Coverdale) one day before the big game was a huge blow. We managed to replace the players, but our confidence was knocked.

We were drafted into “Group C” with 2 other teams. At first, nerves got the better of us and we lost the first game 3-1, only mustering a 0-0 draw in the second. Team Captain, Brendan Nixon, refusing to be beaten, sat the team down for a team talk that his team retrospectively describe as being “second only to Al Pacino’s speech in “Any Given Sunday” (if you’ve not seen it, youtube it).

It seemed to do the trick, because the team then turned a corner and went on to firmly defeating the Scottish, Southern District and Lincoln teams before ultimately facing Alan Wood & Partners in the final.

Before the final, Team Captain Brendan Nixon spoke to the Alan Wood & Partners Captain and agreed that, whatever the outcome of the game, they’d split the £1,000 prize money so that each team would donate £500 to the charity of their choice.

We ultimately went on to win the final game 2-0 and donate £500 to Downs Syndrome Training & Support Services in Bradford, a charity close to UGP’s heart, proving that teamwork, great leadership and determination really can triumph in the end!