What Does Rishi’s New Budget Mean for the UK’s Green Agenda? 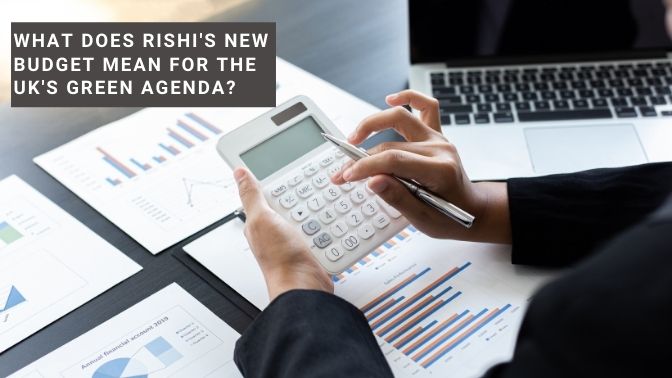 Rishi Sunak recently delivered his second budget under the cloud of the coronavirus pandemic; his last ahead of the country hosting the COP26 UN climate talks. The UK Government’s Budget announcement has legislated for the creation of an infrastructure bank and green finance schemes that could benefit the power industry in the country. But what else does this mean for the UK’s renewable agenda and net zero target?

As part of wider “accelerated growth deals”, the chancellor said that energy projects in Scotland and Wales would benefit from the budget. These included the Holyhead Hydrogen Hub, the Aberdeen Energy Transition Zone, and the Global Underwater Hub, also in Aberdeen.

Aberdeen will also benefit from the North Sea Transition Deal, a government plan to incentivise the decarbonisation of its offshore industry. Trade body Oil and Gas UK said that the deal, expected to be implemented in the first half of 2021, would be “essential” to decarbonisation.

Directly following this, Sunak moved on to offshore wind development, recapping a previously announced pledge to develop the UK’s offshore wind sector. He said: “Offshore wind is an innovative industry, where the UK already has a global competitive advantage. So we’re funding new port infrastructure to build the next generation of wind projects in Teesside and Humberside.”

In what is being seen as one of the most significant parts of this years’ budget for climate action, Sunak announced that the UK’s net-zero goal will be added to the remit of the Bank of England, having become part of the government’s overall “economic policy objective”. The budget promises that the government will issue its first “sovereign green bond – or green gilt” in summer 2021, a move it had already announced last November. At least £15bn in government debt will be specifically earmarked for supporting “green objectives”, with further details of how it can be spent expected in June.

In another move trailed before the budget, Sunak also announced a “green retail savings product” commencing in summer 2021, which will “give all UK savers the opportunity to take part in the collective effort to tackle climate change”. The money raised will be spent according to the same rules as the government’s new green gilts.

A centrepiece for climate-focused government spending over the past year has been the “green homes grant”, which allows people to apply for vouchers to cover the cost of home insulation or installing low-carbon heating. The chancellor first announced the £2bn in grants for home-efficiency upgrades, as well as £1bn for improvements in public buildings, as part of his “green recovery” plans in July 2020, although his party’s election manifesto had previously promised £9.2bn for energy efficiency.

This was then given a boost in the prime minister’s 10-point plan published last November, when a further £1bn and an extra year was added to the existing scheme for home improvements. However, at the same time, stories emerged of a scheme beset by difficulties, with suppliers going unpaid and customers waiting months to take advantage of the grants.

After much speculation, reports surfaced in February that the government did not intend to roll over most of the unspent grants to the next financial year, effectively withdrawing £1bn in funding and leaving just £320m for 2021 to 2022.

On the announcement of an infrastructure bank, legal and business services firm DWF partner Darren Walsh said: “We welcome the Chancellor’s announcement to create the first ever UK Infrastructure Bank. We note that the first projects will cover port infrastructure, but we are hopeful that green energy projects will be prioritised to facilitate the enhancement of the Prime Minister’s ten-point plan for net-zero carbon and a drive towards our green revolution.

“We hope that nascent green technologies such as tidal and hydrogen are supported as well as seeing further development of onshore wind and solar PV. This is further great news for sponsors, developers, and investors and the entire low-carbon supply chain.”

The UK has legislated to make all new cars at least partly electric by 2030. Car leasing comparison website LeaseLoco CEO John Wilmot said: “The lack of any meaningful funding announcement by the Chancellor on the electric car switchover is disappointing.”

One action all businesses can take to further the UK’s progress towards a greener future is to switch to a renewable energy provider such as United Gas & Power. Speak to one of our account managers today; either call us on 0844 318 0044 or complete this quick form.