COP26: Reflections from UGP’s Head of Marketing with a case study in sustainability 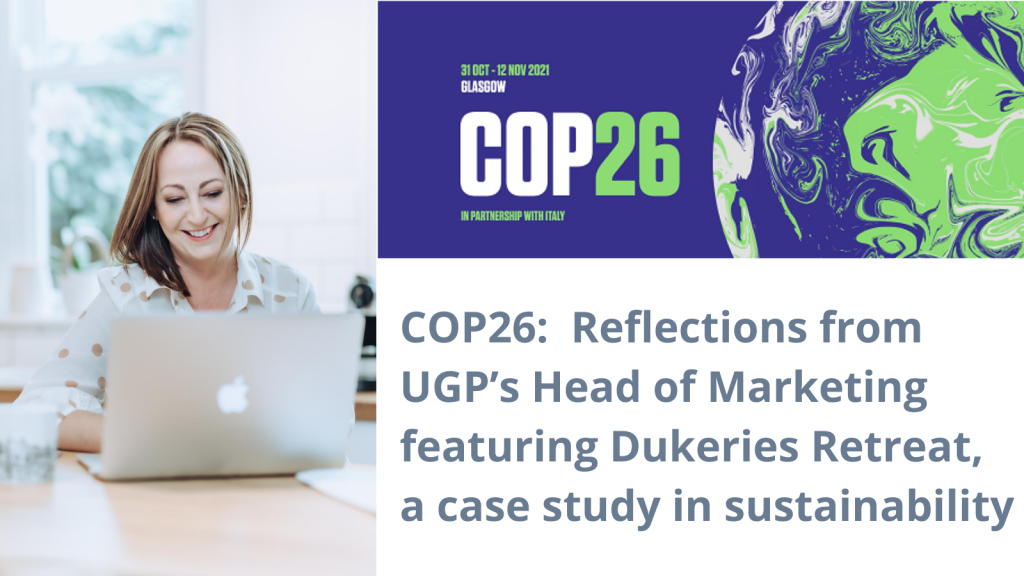 I was never much of an “eco ambassador” – to me the challenges of climate change and environmental sustainability lay firmly at the foot of our world leaders and government bodies. Sure, I did my bit, half-heartedly recycling when it was convenient for me, but I never really thought it was something I could do anything about. Saving the planet was someone else’s problem not mine – let’s leave it to the green party and “eco campaigners” was my distorted attitude – they know more than me. How wrong I was and how little I understood.

In 2011 I had my first child and my perspective changed entirely. Suddenly, the future of our planet wasn’t just about me – it became about my children, grandchildren and great grandchildren, and I began to think about the issues a little deeper. I became acutely aware of the result that the actions I take today will directly and unequivocally impact the future for my family.

The news this week is awash with COP26 pledges and commitments; and of course it should be. Part way through the summit, I’m delighted to see that some progress seems to be afoot.

More than 100 world leaders have promised to end and reverse deforestation by 2030. The countries who have signed the pledge - including Canada, Brazil, Russia, China, Indonesia, the Democratic Republic of the Congo, the US and the UK (the full list is here) - cover around 85% of the world's forests.

The US and the EU have announced a global partnership to cut emissions of the greenhouse gas methane by 2030. The Global Methane Pledge aims to limit methane emissions by 30% compared with 2020 levels. It is one of the most potent greenhouse gases and responsible for a third of current warming from human activities.

South Africa is set to receive $8.5bn (£6.2bn) to help end its reliance on coal in a deal announced at the COP26 climate summit. The country is currently a major emitter of greenhouse gases as a result of its addiction to coal, which it uses to generate electricity.

This deal, funded by wealthier nations, could have both global and local implications.

But in witnessing the COP26 highlights so far, what’s painfully clear to me is that, despite what eventually results at the end of this week, without the effort of every person and business inhabiting the earth, right now, we won’t be able to make a meaningful impact to the very real threat that faces our existence for future generations.

I joined United Gas & Power, a UK commercial energy supplier in 2019, in a marketing role – not to save the planet, but to support and provide for my family as a single mum. Little did I know that in that same year I’d be a part of a scheme that resulted in the business making a full commitment to renewable power for all its customers. I’ve had many highlights in my 25-year career, but this was undoubtedly one of the most memorable.

As the Head of Marketing for UGP I wanted to write something meaningful this week about how we can all affect change in the light of COP26 – but my words will always fall short because without tangible action, I’m just another voice in a sea of voices that know far more than I. So, Instead I thought I’d highlight the efforts of a new, up and coming UK business that has taken it upon themselves to lead the way.

Dukeries Retreat is a business that was born in the chaos of the covid lock down. A hospitality business offering luxury UK glamping, that decided to challenge convention in one of the worst market conditions the industry has ever faced. Their commitment to sustainability is exemplary and at UGP we’re proud to be a part of their story.

Check out their case study here – I hope it will inspire other businesses to follow suit and seek out a sustainable way of working, so that our future generations can continue to enjoy our beautiful planet.

And if you want to check out a fabulous staycation site, a number of UGP employees have been and loved it – check it out! https://www.dukeriesretreat.co.uk